Hi everyone, August has been incredible... Great Shows, Drives and Auctions this month! What more can you ask for!!!

What a weekend at Carlisle!  The 2012 Carlisle Truck Nationals, held August 3-5 at the Carlisle PA Fairgrounds, was once again a hit. The event drew thousands of enthusiasts from across the country and wowed show-goers of all ages. With monster trucks, mini-trucks and every type of truck in between, attendees had three days to embrace the trucking hobby. Those who came to Carlisle did so in style with celebrations, activities and wrapped up with the awards parade on Sunday.

August is always a great month for GOODGUYS events and this year proved it. It seemed like there were more cars and people at this years events, I guess that is what happens when you bring beautiful cars, people and weather together! Check out the award winners at the 11th Great Northwest Nationals and the 26th West Coast Nationals.

Okay, call it what you will — the Monterey Car Week, Pebble Beach Automotive Week, Concours Week... Whatever — but the events held every August on California’s Monterey Peninsula are the most important on the automotive calendar and this August was no different.

The week started with the Automobilia Monterey 10th Annual International Expo, Automobilia Monterey is largest automobilia show in America, and the only time during Monterey Week to find approximately 45 international dealers in a single location. Held at the Embassy Suites in Seaside, visitors enjoyed the relaxed setting while shopping for original posters, photographs, signs, artwork, scale models, books, magazines and everything else that is automobilia. The 10th annual Automobilia Monterey again demonstrated why it’s considered by many to be the preeminent show in North America for collectors of original, vintage automotive collectibles.

Best of Show. This year’s Best of Show was awarded to the stunning, midnight blue 1967 Ferrari 275 GTB/4 NART Spider owned by Larry Carter. In addition to the NART Spider, other notable entrants included the Ferrari 250 GT California Spider; a recently restored Porsche 911 RSR finished in the Jagermeister livery; the rowdy and raucous Trans-Am Class from the Monterey Reunion; plus a wonderful selection of 289 and 427 Cobras that included a rare Dragon Snake.

Concorso Italiano 2012 was held Friday, August 17th on the grounds of the Laguna Seca Golf Ranch in Monterey, California. The Cars of Bertone were featured at the 27th annual Concorso Italiano, with Bertone displaying several concept cars to North America for the first time in honor of their 100th anniversary. Also celebrated was the 55th anniversary of the Fiat 500 with a gathering of classic and modern Cinquecentos. A 1959 Fiat 500 Bianchina, 1960 Fiat 500D, 1971 Fiat 500L and a wonderful selection of modern Fiat 500 Abarths were among the entrants. Best of Show at the 2012 Concorso Italiano was awarded to the 1955 Ferrari 250 GT Europa owned by Ken and Dayle Roath of Newport Beach, California.

2012 Legends of the Autobahn was staged Friday, August 17th at the Rancho Canada Golf Club in Carmel Valley, California. Hosted by the BMW Car Club of America, Mercedes-Benz Club of America, the Porsche Club of America and, new for 2012, the Audi Club of North America, the third annual all-German marque Concours brang together enthusiasts, owners and aficionados of distinctive German cars to view some of the finest marques in the world.

The Quail, A Motorsports Gathering was held Friday, August 17th at the Quail Lodge Golf Club in Carmel, California. The 10th annual “Quail” again celebrated the finest sports and racing automobiles and motorcycles, while offering wonderful food, drink and camaraderie among like-minded enthusiasts. Best of Show at the Quail Motorsports Gathering 2012 was awarded to the 1930 Bentley 4 1/2 Liter Supercharged Gurney Nutting Two Seat Roadster owned by Robert Lee. The car is a one-off, built for the Chairman of Bentley Motors Limited at the time, Captain Woolf Barnato. Constructed as a race car that never raced, the Bentley has been lovingly preserved and restored throughout time. “It feels great. To win something like this is very difficult and there is a lot of work that goes into it,” said Lee. The 1947 Ferrari 159S 002C entered by Jim Glickenhaus won the Spirit of Quail award. 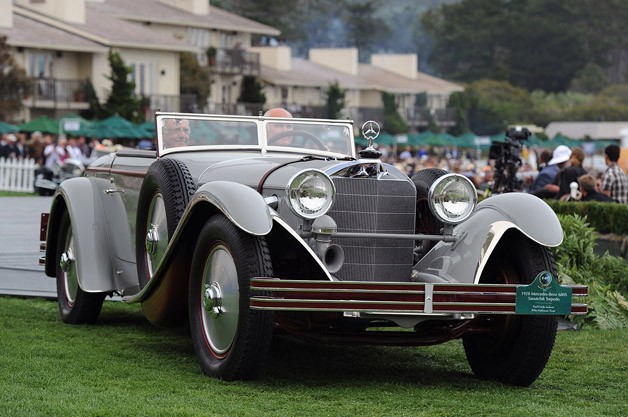 Benz 680S Saoutchik Torpedo owned by Paul and Judy Andrews. The winning car, powered by a 6.8-liter supercharged engine, is one of seven Torpedo bodies designed by Jacques Saoutchik for the Mercedes-Benz 680S chassis. It was originally shown at the 1928 New York Auto Show. Other nominees for Best of Show included the 1935 Duesenberg J Gurney-Nutting Speedster entered by the William Lyon Family, the 1931 Duesenberg J Derham Tourster owned by Joseph and Margie Cassini III and David and Adele Cohen’s 1933 Alfa Romeo 6C 1750 Gran Sport Figoni Coupe.

This was Mecum’s fourth year at Monterey, an expansion which many considered risky at best and foolish at worst. The Mecum team has shown that it was intelligently conceived and nearly flawlessly executed and the Mecum auction now captures the third highest sale total on the Peninsula.

It takes a lot of hard work to put on a three-day sale with 559 cars, motorcycles and automobilia (‘Road Art’ in Mecum-speak) but Mecum continues to pull it off ever more effectively. The numbers – like the 85.4% increase in the mean transaction value – tell an interesting story.

Coming up this September! "The Outlook"

Cruise for the Cure

Have Fun and be Safe Everyone!