Can Clouded Headlights Cause Glare on on-coming traffic? 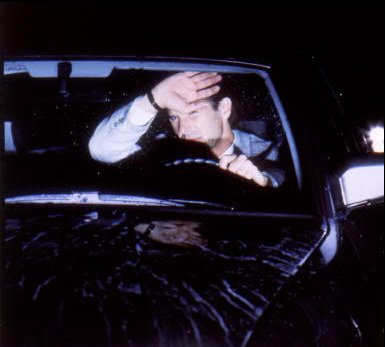 Ever flash your headlights at an on-coming vehicle on a two lane road because of the glare, only to find that when they flash back the glare gets worse?

Well your first thought would probably be that their headlights are out of alignment.

Many times, if one headlight is glaring more than the other, this is more than likely the case.

However, If both of the on-coming vehicle's lights were fairly even in their glaring projection (ruling out a truck that is jacked up really high) the odds are that the vehicle's headlights are in poor condition, covered with oxidation, foggy or clouded, and in need of restoration.

Their headlights have become a hazard to you! Not to mention that the other driver's direct line of sight is severely impaired as a result.

When auto headlights become oxidized and clouded the light projection becomes distorted by reflecting backwards back into the headlight assembly off the back of the oxidation or clouded area on the lens, causing what light that is forced through the lens to be widespread with no focused direction, and your left with ( Bright & Brighter ). The focused projection between high & low beams will become useless.

NOTE: It is recommended that when dealing with on-coming traffic on a two lane road you should always focus on the white line on the right hand side of the road in front of you when passing traffic, the reason being that statistics show that drivers tend to drift toward the direction they are looking in, hence facing the very real possibility of a head-on collision!

Usually these accidents involve only the driver side front quarter panels on both vehicles, in fact, this happens so often that Insurance companies specifically test driver side to driver side head-on impacts of all new and earlier model vehicles to determine the safety-risk factors of those vehicles.

Many believe that poor vision, glare and drift factors are major contributers in this sort of collision.

So far I have been blaming the other guy's headlights for this very real accident scenario, so lets put ourselves in that position, have you noticed anyone flashing their headlights at you when your low-beams are on?

If so, then consider checking your headlights for clarity, it doesn't take much distortion to cause glare or impairment of vision while driving at night.

If you want to buy your own headlight restoration kit and do-it-yourself, thats fine, just do it, and don't procrastinate about it!

You could be saving the lives of your family and or other families by taking the time and a reasonably small investment for your safety.

Hello Ethan, "Friend me" and I will give you my answer.

Good info Scott... I like to use Meguiar's PlastX clear plastic cleaner & polish and the Chemical Guys Glassylite headlight restoration and protection system.

Yea some people like Meguiar's, but it doesn't work on sevier  cases, and many people don't like having to redo them so often. I haven't tested "Glassylite" so I can't give my opinion on that one.

They keep coming out with new kits and the only real way to test them is to use them on a car that is driven regularly, and of course you have to wait until they turn again to determine the longevity of a product.

You see I don't believe that UV rays are the main cause of build-up and the destruction of the factory UV film on auto headlights, read my blog post...

Some deductive reasoning on headlight oxidation

Sorry it's so big, I copy & pasted the title. Please let me know if this link doesn't work.

Good information Scott, thanks for sharing...